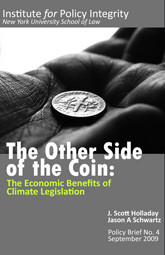 The Other Side of the Coin

The Economic Benefits of Climate Legislation

This brief compiles estimates from several different federal agencies, and calculates that the economic benefits of the emissions cap in the Waxman-Markey bill likely dwarf the costs by as much as 9-to-1 or more. The benefit-to-cost ratio was determined using the EPA’s previously released (and peer reviewed) cost estimates and a newly released “social cost of carbon” estimate from an interagency process which provides a conservative dollar figure for the benefits of greenhouse gas reductions.