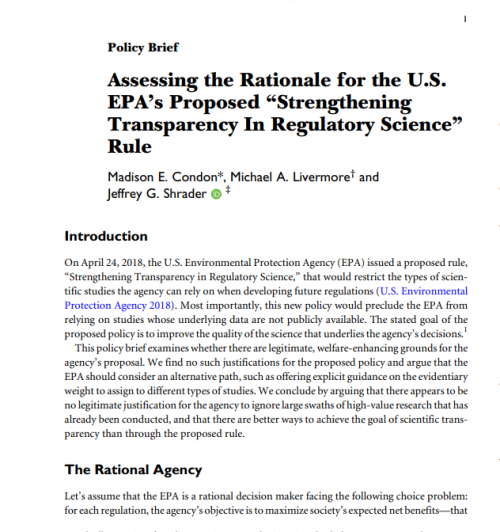 Assessing the Rationale for the EPA’s Proposed Regulatory Science Rule

The U.S. Environmental Protection Agency (EPA) is considering a new policy that would prohibit the agency from issuing regulations that rely on studies whose underlying data are not publicly available. While the EPA claims it is pursuing this policy in the interest of transparency, we argue that such a prohibition would greatly hinder, rather than help, the rulemaking process and would likely result in undesirable regulatory outcomes that fail to maximize economic welfare.

Published in Review of Environmental Economics and Policy, this policy brief argues that a good faith effort to encourage data availability should focus on forward-looking incentives for transparency rather than the exclusion of a whole class of studies, and that weighting older studies based on their evidentiary value is preferable to removing valuable information from agency consideration.