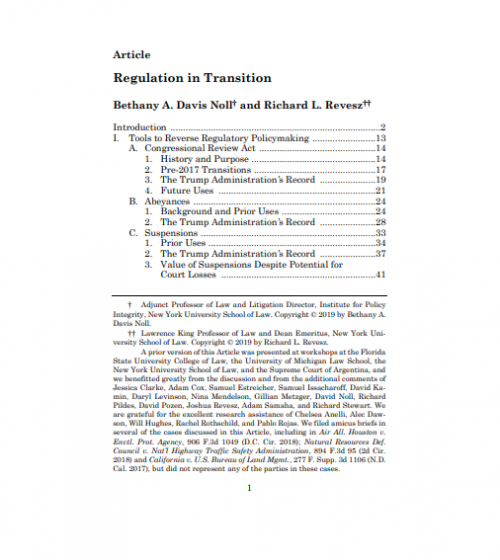 Presidents have long sought to roll back their predecessors’ regulatory policies. To do so, they have typically relied on efforts to repeal regulations and to withdraw unpublished or non-final regulations pursuant to “stop-work” orders directed at agency heads. President Trump is no exception. But rather than stick to just the typical playbook, he made aggressive use of three other instruments that had not previously played a significant role: Congressional Review Act disapprovals, requests that courts hold in abeyance pending cases challenging Obama-era regulations, and suspensions of regulations issued under the Obama administration. Through these strategies, the Trump administration was able to reach a far greater proportion of regulations finalized during Obama’s presidency than would have been possible under prior practices.

This article, published in the Minnesota Law Review, identifies this new trend in aggressive regulatory rollbacks and argues that it is likely to become an enduring feature of American politics. In the current climate, aggressive rollback strategies will lead to an important reconceptualization of the Executive Branch, in which future one-term presidents are unlikely to see a significant portion of their regulatory output on important matters survive and the incentives that presidents face in fashioning their regulatory policies will be significantly different. The changing incentives will affect a broad set of decisions, from transition planning for an incoming administration to the timing of regulatory actions relative to a president’s reelection campaign. Important electoral incentives will also be affected.

With reelection now a prerequisite for leaving a significant, durable regulatory legacy, regulatory policy will take on characteristics that are similar to electoral schemes in which multiple votes are necessary for significant decisions like constitutional amendments, which are relatively common in U.S. states and in foreign jurisdictions. But the justifications that undergird these multiple-vote requirements—legitimacy and stability—are largely inapposite to federal regulatory policy and thus do not provide normative support for this reconceptualization of the Executive Branch. Yet despite that, these features are likely to remain part of the political and administrative landscape for some time to come and future presidential administrations will need to adjust to them.