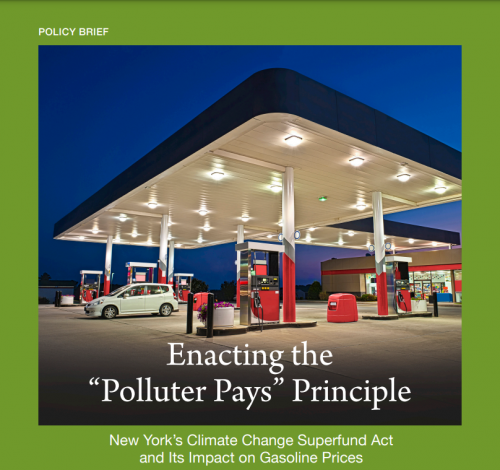 This policy brief analyzes how New York State’s recently proposed Climate Change Superfund Act is most likely to affect consumer gasoline prices. The proposed Act would require payments from fossil-fuel companies based on their historical contributions to current greenhouse gas levels in the atmosphere. The payments would be used to build green infrastructure to help the state adapt to climate change.

The brief finds that the Act would be unlikely to alter the price of gasoline at the pump in New York or the price of crude oil more generally, as companies would treat these payments as one-time fixed costs and face incentives to leave their production levels and retail gasoline prices unchanged. The structure of the oil market in New York and globally would also be unlikely to change in response to the Act, as oil company profits would likely remain positive. Finally, as climate change is likely to disrupt energy markets, revenue generated by the Act would likely temper future energy cost impacts in the state due to the infrastructure projects launched through this fund. Overall, the Act would likely have a negligible impact on current and near-term oil prices, while potentially lowering future energy prices in New York, including for transportation.