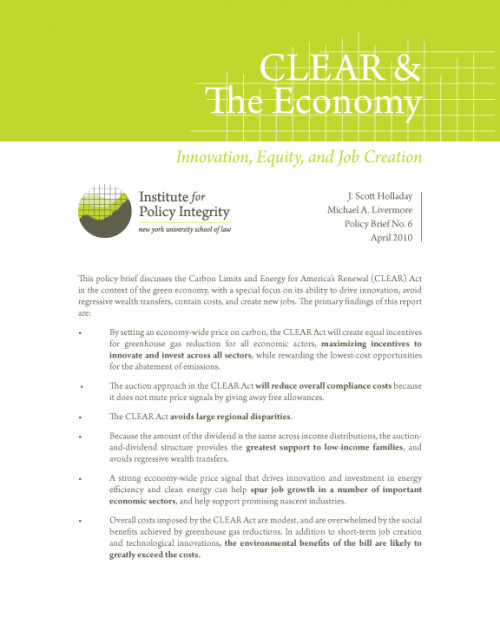 The CLEAR Act, sponsored in the Senate by Maria Cantwell (D-WA) and Susan Collins (R-ME), would place a price on carbon, auction 100% of the pollution permits, and refund most of the revenue back to consumers. This brief found that pricing carbon would spur investment and innovation in new energy technologies, giving a substantial boost to industries like manufacturing and construction—both hit hard in the recent financial crisis. Relatively well-paying jobs would be generated in these sectors, helping to mop up the slack created by the recession.

The auction and rebate in the CLEAR Act would also create a buffer effect for Americans—shielding their pocketbooks from increases in energy prices. Economic analysis has found that most taxpayers would break even or come out ahead under this plan.

An added benefit of the rebate is that it helps smooth out regional disparities. For example, after accounting for the rebate, the difference between the state with the highest payoff (Oregon) and lowest payout (Indiana) is only $91 per person per year.