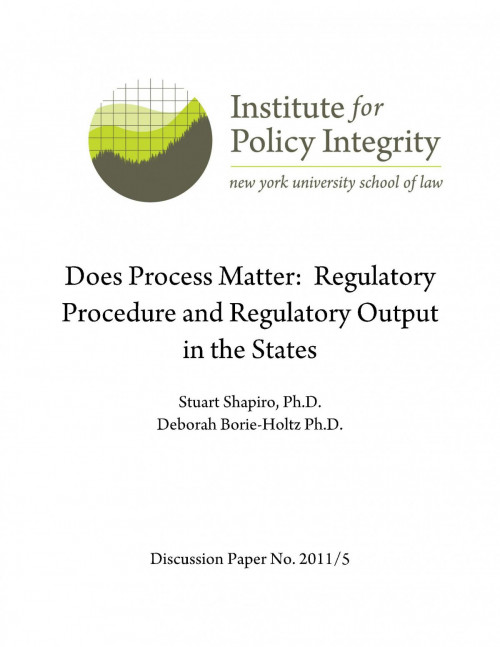 Regulatory Procedure and Regulatory Output in the States

Rulemaking in the states has become much more widespread than it was when many state legislatures began to pass their administrative procedures acts more than 40 years ago.

A wide diversity of rulemaking procedures presents a natural laboratory in which to study several questions that have long interested scholars of the regulatory process. Do regulatory procedures lead to fewer regulations? If so, which ones? Or do political factors play more of a role in regulatory outcomes?

This paper finds that the level of rulemaking is more closely correlated to the lawmaking activity in the state rather than proceduralization which suggests no disrespect for the law, as Churchill argued, but rather that the lawmakers themselves have given rise to the thousands of regulations in the states.

The paper examines data from 28 states that provided access to final regulations online and finds that many of the regulatory procedures in a particular state did not affect the number of rules adopted. States with more regulatory procedures did not issue fewer rules. The procedural provision that appeared to have the greatest effect on regulatory output was a requirement that agencies complete their rulemaking within a prescribed period of time. This requirement led to fewer rules being promulgated. Executive review appeared to deter rulemaking but only when the governor was a Republican. A combination of executive and legislative review may work to deter regulation.