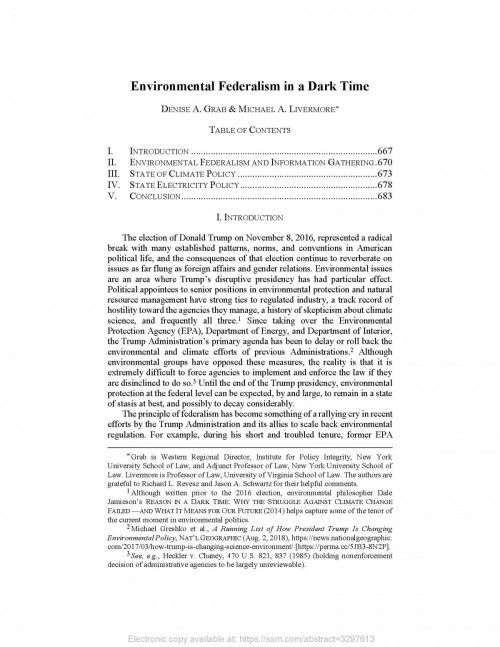 Environmental Federalism in a Dark Time

The principle of federalism has become something of a rallying cry in recent efforts by the Trump Administration and its allies to scale back environmental regulation. For example, during his short and troubled tenure, former EPA Administrator Scott Pruitt argued that the federal government has become too intrusive and that states should be returned to a position of “regulatory primacy” on environmental matters. Some states have responded to the impeding federal retreat by forging ahead. For example, California has continued to take aggressive steps to curb greenhouse gas emissions, and has even taken steps to project its influence internationally. However, despite these hopeful signs of resistance, the net effect of the Trump Administration’s efforts to scale back federal environmental policy is likely to undermine rather than energize state environmental policymaking, especially in Republican-dominated and swing states, where the climate policy vacuum is most acute.

This article, published in the Ohio State Law Journal, explains why, in cases where collective action is needed, the national government remains indispensable. Some states, especially Blue states, continue to forge ahead on
climate and clean energy policy in the face of regulatory rollbacks at the federal level. But these efforts face headwinds in the form of resistance from the federal government. Even worse, development on these policies has slowed or stopped in many Red and Purple states under the Trump Administration. This represents a lost opportunity to develop valuable political information about how to productively approach climate policy in more conservative areas.