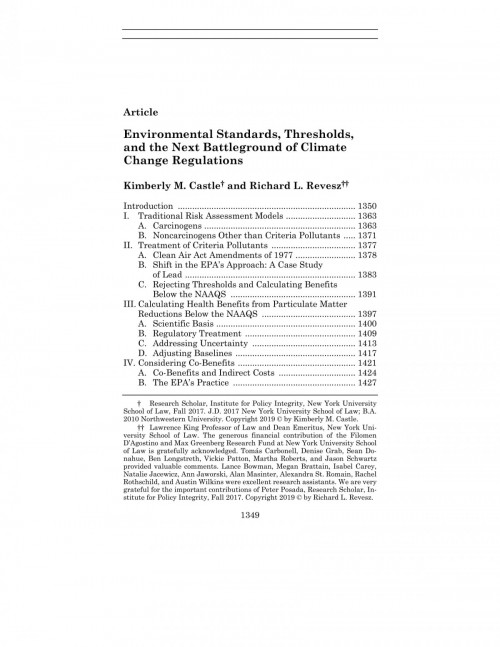 Environmental Standards, Thresholds, and the Next Battleground of Climate Change Regulations

This article, published in the Minnesota Law Review, addresses a central battleground of the debate about the future of greenhouse gas regulations: the valuation of particulate matter reductions that accompany reductions in carbon dioxide emissions. The benefits from particulate matter reductions are substantial for climate change rules, accounting for almost one half of the quantified benefits of the Obama Administration’s Clean Power Plan. These benefits are also significant for regulations of other air pollutants, making this issue one of far-reaching importance for the future of environmental protection.

Opponents of environmental regulation, including the Trump Administration, have recently embraced an aggressive line of attack on particulate matter benefits. They argue alternatively that these benefits are not real; are being “double counted” in other regulations; or should not be considered when they are the co-benefits, rather than the direct benefits, of specific regulations. This article collects and analyzes for the first time the robust support for valuing particulate matter benefits. An examination of the scientific literature, longstanding agency practices under administrations of both major political parties, and judicial precedent reveals that particulate matter benefits deserve a meaningful role in regulatory cost-benefit analysis.