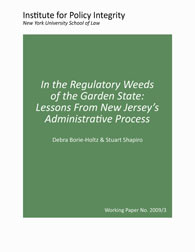 In the Regulatory Weeds of the Garden State

There is a dearth of studies about the effects of the proceduralization of the rulemaking process on state regulations. In the Regulatory Weeds of the Garden State focuses on regulations promulgated in New Jersey, both prior to and following major procedural changes enacted in the state in 2001. The study finds that substantive comments to agency proposals are rare, impact analyses are pro forma at best, negotiated rulemaking has never been used by the agencies, and the use of specifically designed procedural tools, such as pre-notices by agencies to “test the waters” and rule adoptions initiated by the public, are atypical.