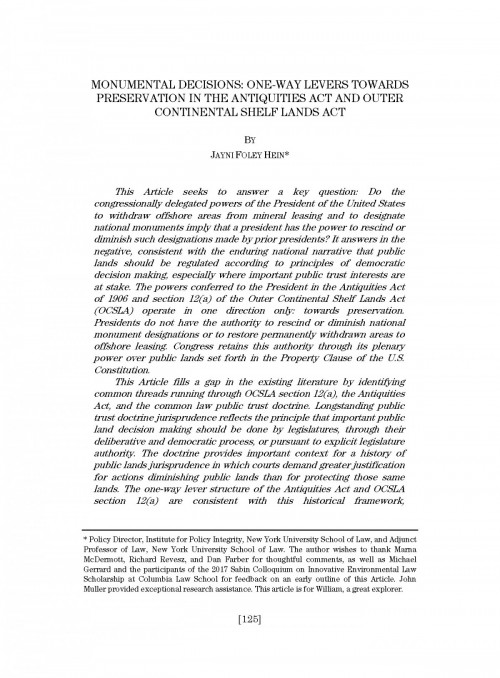 One of the most controversial and hotly contested legal issues in the public lands space is whether a President can reverse or diminish a national monument established by a prior President, without express Congressional authorization. President Trump has taken unprecedented actions by sharply reducing the boundaries of national monuments, and by reversing a moratorium on new offshore oil and gas leasing enacted by President Obama. In new legal scholarship, Jayni Hein argues that the powers granted to the President in the Antiquities Act and Outer Continental Shelf Lands Act (OCSLA) operate in one direction only: towards preservation. Presidents do not have the authority to rescind or diminish national monument designations, nor to re-open previously withdrawn areas to offshore leasing. Congress, alone, retains this authority over public lands.

In examining the extent of presidential power over protected public lands, courts should look to the Antiquities Act and OCSLA, but also the broader context of public land management, including the public trust doctrine. Interpreting these two statutory provisions to confer a one-direction power to the President is consistent not only with statutory text, the relevant constitutional framework, and legislative history, but also with the enduring national narrative that public lands should be regulated according to principles of democratic decision making, especially where important public trust interests are at stake. While allowing relatively unencumbered presidential actions to protect special places and natural resources, they reserve to Congress the more “monumental” power to modify or abolish national monuments and to allow withdrawn offshore lands to be leased for fossil fuel extraction.