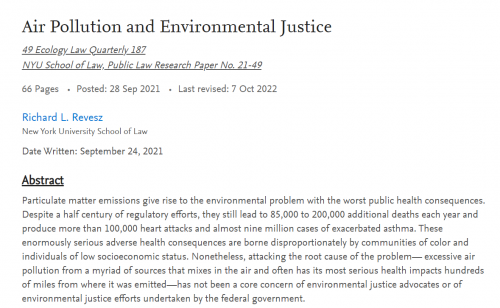 Particulate matter emissions give rise to the environmental problem with the worst public health consequences. Despite a half century of regulatory efforts, they still lead to 85,000 to 200,000 additional deaths each year and produce more than 100,000 heart attacks and almost nine million cases of exacerbated asthma. These enormously serious adverse health consequences are borne disproportionately by communities of color and individuals of low socioeconomic status. Nonetheless, attacking the root cause of the problem— excessive air pollution from a myriad of sources that mixes in the air and often has its most serious health impacts hundreds of miles from where it was emitted—has not been a core concern of environmental justice advocates or of environmental justice efforts undertaken by the federal government.

Three recent developments, however, could augur a beneficial change, turning the reduction of particulate emissions into a core environmental justice concern for both advocates and the federal government. First, the COVID-19 crisis brought to light that disadvantaged communities have significantly higher death rates from the virus as a result of their exposure to greater particulate matter concentrations. Second, the Environmental Protection Agency announced in June 2021 that it would reopen the Trump administration’s 2020 decision to not strengthen the National Ambient Air Quality Standards for particulate matter, giving the agency a vehicle for making an about-turn and giving environmental justice considerations a meaningful role in the process for revising the National Ambient Air Quality Standards. Third, the Biden administration, beginning on Inauguration Day on January 20, 2021, put issues of equity and justice for disadvantaged communities at the center of its environmental agenda.