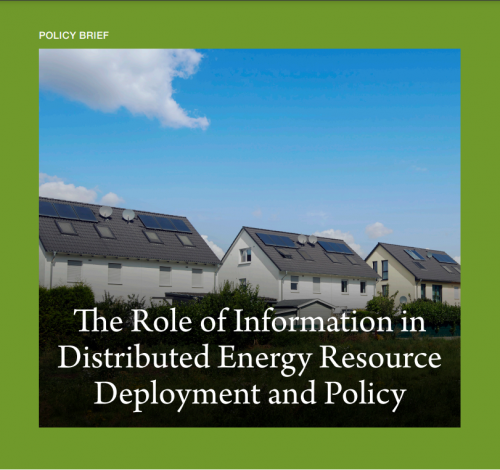 The Role of Information in Distributed Energy Resource Deployment and Policy

Distributed energy resources (DERs) play an important and growing role in the electricity grid and the clean energy transition. Technological improvements, consumer preferences, and state and federal policies all make it likely that DERs’ role will continue to grow. However, efficient deployment and operation of these resources still require smart policies. While appropriate compensation for DERs has received considerable attention in DER policy discussions, one important dimension has received less attention: informational gaps and asymmetries. In particular, key information about distribution networks, energy consumption, and marginal emission rates is often either entirely lacking or readily available only to some parties.

Such information disparities can impede effective policymaking. Several states have adopted legislative and regulatory measures to address these problems, with mixed results. To overcome the inefficiencies information asymmetry creates, regulators must carefully tailor disclosure mandates and incentives for utilities, as these actors often have little incentive to go beyond the letter of the law in data disclosure. In sum, when designing DER compensation schemes, policymakers should consider the role of information and how additional information might improve the economic efficiency of a scheme to better reflect value.