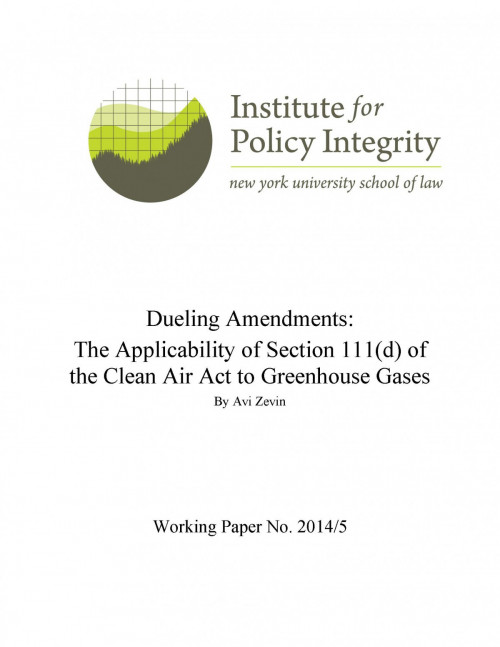 This is a student working paper, and it does not necessarily represent the views of the Institute for Policy Integrity.

The United States Supreme Court determined that greenhouse gases (GHGs) were an “air pollutant” under the Clean Air Act in its ruling on Massachusetts v. EPA. The Environmental Protection Agency (EPA) has since taken steps to regulate GHGs under a rarely utilized provision of the Clean Air Act, section 111(d). Despite the text printed in the U.S. Code, the true text of section 111(d) is in doubt. This is because of a small but potentially significant legislating error that occurred during the creation of the 1990 Clean Air Act Amendments, when the Senate and House of Representatives made different revisions to section 111(d), both of which were passed by both houses of Congress and signed by the President. This paper analyzes whether the conflicting amendments to section 111(d) will prove to be a problem or an opportunity for EPA in its efforts to regulate GHGs.

Part I of the paper details and analyzes the dueling provisions of the 1990 Clean Air Act that seek to amend section 111(d) and considers how this will impact climate regulation. Part II lays out the legislative and regulatory history of section 111(d), virtually undiscussed in the existing literature, to develop a sense for what each amendment was attempting to accomplish, outline how the conflict arose, and detail EPA’s regulatory actions in light of the conflict. On the presumption that the first actor to address this issue will be EPA when it issues upcoming regulations, Part III considers to what extent courts will be deferential to whatever interpretation an agency develops in resolving dueling amendments in general, and this conflict in particular. Part IV presents and analyzes three possible types of interpretive resolutions to this conflict in light of existing theory regarding statutory interpretation. Finally, Part V concludes that, despite the conflict outlined above, almost all of the reasonable resolutions to the conflict leave EPA with an “out” to address existing sources of GHGs.