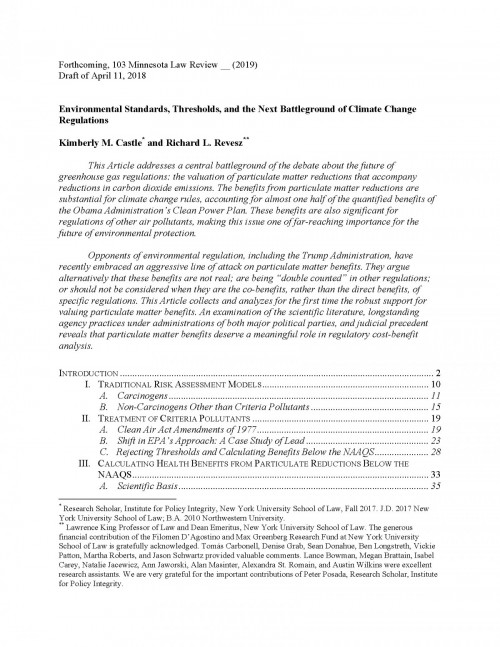 Environmental Standards, Thresholds, and the Next Battleground of Climate Change Regulations

Regulations to curtail climate change have the additional benefit of reducing air pollution by accelerating the shift away from carbon-intensive and high-polluting energy such as coal. The benefits from reducing just one air pollutant – particulate matter – account for almost half of the quantified benefits of the Obama Administration’s Clean Power Plan. Regulatory opponents have launched an aggressive attack on the use of these benefits to justify climate change regulations. They claim that these benefits are not real, are accounted for in other regulations, or should not be considered because they are indirect benefits. This article, published in the Minnesota Law Review, collects and analyzes for the first time the robust support for valuing particulate matter and other air pollution reduction benefits. Following an examination of the scientific literature, longstanding agency practices under administrations of both major political parties, and judicial precedent, the authors conclude that particulate matter benefits deserve a meaningful role in regulatory cost-benefit analysis.