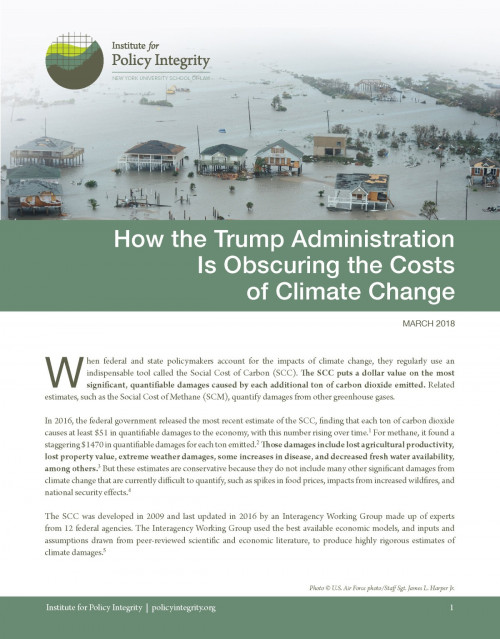 How the Trump Administration Is Obscuring the Costs of Climate Change

When federal and state policymakers account for the impacts of climate change, they regularly use a tool called the Social Cost of Carbon (SCC). The SCC puts a dollar value on the most significant, quantifiable damages caused by each additional ton of carbon dioxide emitted. The most recent estimate of the cost is at least $51 per ton and rising over time. But now, turning its back on years of work, the Trump administration has disbanded the federal group that developed the SCC, and produced a new “interim” estimate claiming that each ton of carbon dioxide causes as little as $1 in climate damages.

This issue brief describes how the Trump Administration reached this misleading number by ignoring the interconnected, global nature of our climate-vulnerable economy and obscuring the devastating effects that climate change will have on younger and future generations. Though the administration has been proposing rollbacks of environmental rules using this problematic SCC estimate as justification, we explain why federal agencies and state governments should continue using the most recent estimate by the Interagency Working Group that developed the SCC.