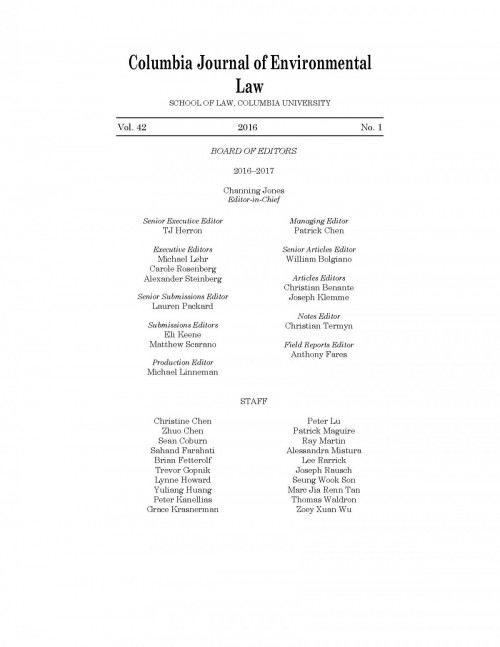 International Reciprocity as Justification for a Global Social Cost of Carbon

U.S. climate regulations present a special case of federal agencies applying a global, rather than exclusively domestic, perspective to the costs and benefits in their regulatory impact analyses. Since 2010, federal agencies have emphasized global valuations of climate damages for policies that affect carbon dioxide emissions, using a metric called the “Social Cost of Carbon.” More recently, agencies have also begun to use a global valuation of the “Social Cost of Methane,” for methane emissions. Yet lately, these global metrics have come under attack in courtrooms and academic journals, where opponents have challenged the statutory authority and economic justification for global values. This paper defends a continued focus on the global effects of U.S. climate policy, drawing on legal, strategic, and economic arguments.

International reciprocity presents the strongest justification for a global focus. Because the world’s climate is a single interconnected system, the United States benefits greatly when foreign countries consider the global externalities of their greenhouse gas pollution and cut emissions accordingly. Game theory predicts that one viable strategy for the United States to encourage other countries to think globally in setting their climate policies is for the United States to do the same, in a tit-for-tat, lead-by-example, or coalition-building dynamic. In fact, most other countries with climate policies already use a global social cost of carbon or set their carbon taxes or allowances at prices above their domestic-only costs. Additional policy justifications for a global SCC include the inevitability of significant “spillover” effects and the United States’ willingness to pay to prevent climate damages occurring outside U.S. borders. For all these reasons, a domestic-only social cost of carbon or methane would fail to transparently disclose the true scope of climate-related costs and benefits that matter to U.S. policymakers and the public.

As for legal mandates, the United States has already signed and ratified one international treaty that commits it to consider the global climate effects of its domestic actions. Two key statutes for U.S. climate policy—the Clean Air Act and the National Environmental Policy Act—do the same, and it is reasonable for agencies to consider global climate effects under the other statutes most used to date for climate regulation. Finally, legal standards for rational rulemakings may constrain any future attempt to ignore the globally interconnected climate effects of regulatory or deregulatory actions.