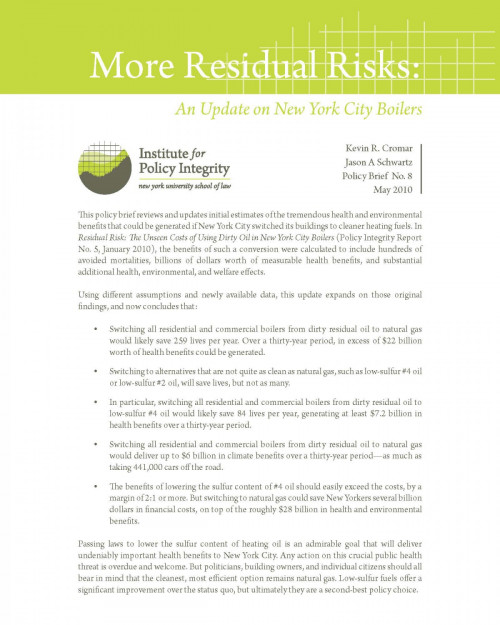 Up to 259 lives could be saved every year if certain large buildings in New York City stopped burning dirty heating oil. Using newly available data, a reworked analysis Policy Integrity’s analysis finds that residual oil has even greater consequences than estimated in an earlier report.

Official reports estimate that about 9000 big buildings in Manhattan, Brooklyn, Queens, and the Bronx have boilers that burn what’s known as “residual oil” to heat their units. These leftovers from the petroleum distillation process release soot and toxic chemicals into the air when burned.

Small particles in soot pollution can travel deep into lungs and slip directly into the bloodstream. Over time, inhaling the fumes can lead to cardiovascular disease, asthma, and early death.

To reach the results in this report, the authors used three separate methodologies to get three estimates of the number of lives saved from converting to cleaner heating oil: a comparison of heating season and non-heating season nickel concentrations, a compilation of three independent emissions studies, and an analysis of newly available data from the City.

The three estimates—using different monitoring data and methodologies—all generate roughly the same numbers for annual avoided deaths. That consistency suggests that the reported range of lives saved is likely to be accurate.