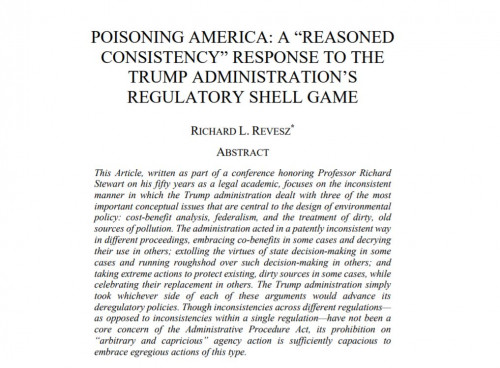 Published in the NYU Environmental Law Journal, the article focuses on the inconsistent manner in which the Trump administration dealt with three of the most important conceptual issues that are central to the design of environmental policy: cost-benefit analysis, federalism, and the treatment of dirty, old sources of pollution. The administration acted in a patently inconsistent way in different proceedings, embracing co-benefits in some cases and decrying their use in others; extolling the virtues of state decision-making in some cases and running roughshod over such decision-making in others; and taking extreme actions to protect existing, dirty sources in some cases, while celebrating their replacement in others. The Trump administration simply took whichever side of each of these arguments would advance its deregulatory policies. The article finds that though inconsistencies across different regulations— as opposed to inconsistencies within a single regulation—have not been a core concern of the Administrative Procedure Act, its prohibition on “arbitrary and capricious” agency action is sufficiently capacious to embrace egregious actions of this type.