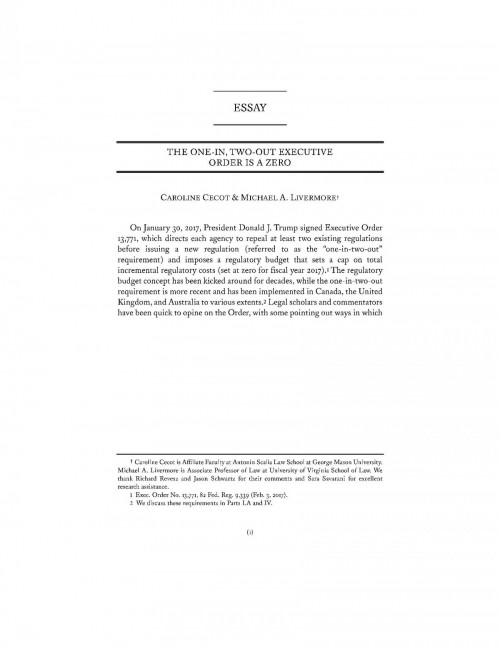 President Trump’s Executive Order 13,771 directs each agency to repeal at least two existing regulations before issuing a new one and imposes a regulatory budget that sets a cap on total incremental regulatory costs. In this essay, Caroline Cecot and Michael Livermore evaluate the Order against three priorities that have been adopted by prior administrations or promoted by scholars, commentators, or interest groups: (1) increasing net benefits of regulation, (2) decreasing regulatory burdens, and (3) increasing presidential control over agencies. They also compare the Order against the regulatory reform efforts in other countries.

The authors conclude that the Order is unlikely to achieve any of these goals without significant changes. They urge President Trump to scrap the Order and instead ensure that agencies engage in reasonable retrospective review of existing regulations and that the Office of Information and Regulatory Affairs has sufficient staff to oversee agency decisionmaking, among other sensible reforms.