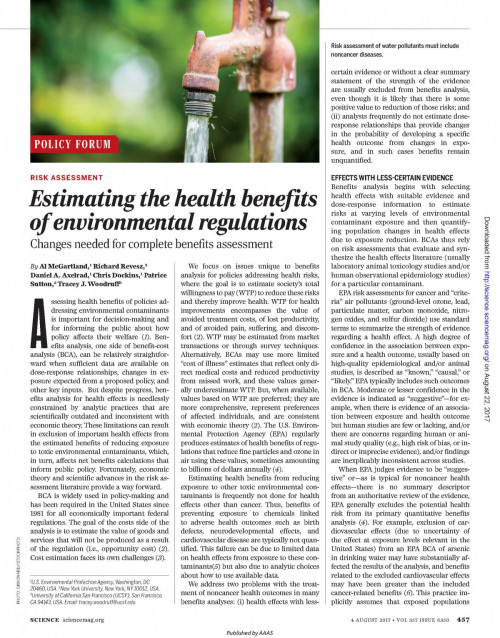 Regulating toxic pollutants benefits society by limiting public exposure to harmful pollution. By accurately quantifying these benefits, policymakers can improve the design of regulations that protect public health and better communicate the magnitude of these protections to the public. A new article in the journal Science co-authored, among others, by Richard Revesz (Director of the Institute for Policy Integrity), Al McGartland (Director of EPA’s National Center for Environmental Economics), and Tracey Woodruff (Professor of Obstetrics, Gynecology, and Reproductive Sciences at the University of California at San Francisco) examines how this process can be improved.

The article challenges the current approach to regulating non-carcinogenic pollutants, which are generally treated as if they had an exposure level below which there are no adverse health effects for the larger population. This questionable assumption that a “safe level” of exposure exists for most pollutants continues to be widely used by regulatory agencies, even after the National Academy of Sciences recognized its flaws almost a decade ago. In turn, this scientific shortcoming skews the cost-benefit analyses of regulations and systematically underestimates the benefits of pollution reduction. The article also takes issue with the treatment of pollutants for which the evidence of adverse health effects fall short of near-certainty. Even though individuals have a willingness to pay to reduce the concentrations of such pollutants, the current regulations assign no value to such reductions.