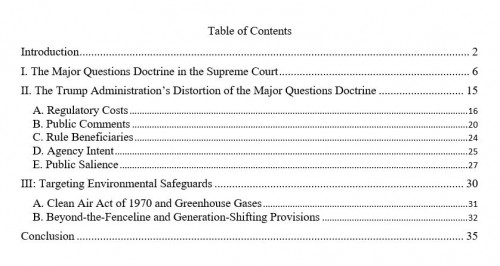 The Supreme Court has made clear, in the five cases in which it has dealt with this issue, that the major questions doctrine applies only in exceptional cases. In contrast, during its four years in office, the Trump Administration invoked the doctrine routinely in support of its deregulatory assault on the administrative state.

The Trump Administration’s most sustained weaponization of the major questions doctrine was against the Clean Power Plan, which regulated the greenhouse gas emissions of existing power plants. And, under the similarly wrongheaded and even broader arguments made by its allies, all greenhouse gas regulations could be suspect on major question grounds.

These arguments have already found support in lower court decisions and are still being pressed by state attorneys general and other influential litigants; bringing to light their enormously problematic application is important to foreclose their successful revival in future administrations.