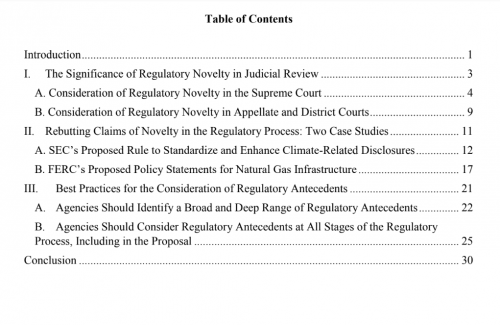 In recent years, federal courts have increasingly assessed the legality of regulatory action by considering its antecedents, or lack thereof, in prior agency actions. In several notable Supreme Court decisions—most recently, in West Virginia v. Environmental Protection Agency—a majority of justices have expressed skepticism of agency authority when “an agency claims to discover in a long-extant statute an unheralded power to regulate a significant portion of the American economy.” District and appellate courts have relied on this language to strike down numerous agency actions dating back to 2014.

Yet as this article explains, federal agencies have insufficiently adapted to this increased judicial focus on regulatory antecedents. While significant agency rulemakings typically include extensive dockets with many different types of analysis, they have generally provided limited analysis of regulatory antecedents. When agencies do provide relevant analysis, as they have for several recent proposals that have met objections under the major questions doctrine, such analysis often fails to catalog key regulatory antecedents or is insufficiently targeted to legal objections from opponents of the policy. In some actions, the only explicit discussion of the Supreme Court’s emphasis on agency exercise of “unheralded power” comes from dissenting commissioners on a multi-member agency.

This article suggests that agencies more extensively catalog regulatory antecedents at all stages of the rulemaking process, from drafting to promulgation. By assessing antecedents in regulatory proposals, agencies can more fully lay the foundation for their authority and facilitate targeted comments that consider whether the antecedents offered by the agency support the proposed action. This will enable an even more complete analysis of regulatory antecedents in the final rulemaking, including responses to legal objections, which will provide government litigators with a roadmap for responding to claims that the agency action is unheralded and thereby reduce the vulnerability of agency action under the major questions doctrine.