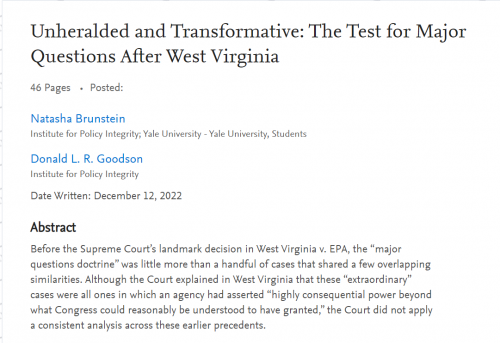 Unheralded and Transformative: The Test for Major Questions After West Virginia

In West Virginia v. EPA, the Supreme Court expressly relied on the “major questions doctrine” for the first time in a majority opinion to hold that a federal agency lacked authority to issue a regulation, there the Environmental Protection Agency’s Clean Power Plan. Before West Virginia, the major questions doctrine was little more than a handful of prior cases that shared a few overlapping similarities, but the Court did not apply a consistent analysis across these earlier precedents. In other words, the doctrine lacked a framework to guide lower courts and litigants.

This paper explores whether West Virginia provides such a framework and concludes that it does. The West Virginia Court applied a two-prong framework for determining when the major questions doctrine applies that asks whether the agency action (a) is “unheralded” and (b) represents a “transformative” change in the agency’s authority. West Virginia further holds that, if the doctrine applies, the reviewing court should greet the agency’s assertion of authority with “skepticism,” but the agency can overcome that skepticism by identifying “clear congressional authorization” for its action.

A close look at West Virginia and the alternative frameworks that parties and others urged on the Court in the West Virginia litigation also reveals a great deal about what the major questions doctrine is not. Most notably, many argued that the doctrine applies any time an agency’s action raises a question of economic and political significance, with litigants offering myriad, indeterminate factors of significance like cost, overall economic impact, number of affected persons, and degree of public and political attention. But the majority chose not to adopt a multi-factor test, instead applying a two-prong framework that appears designed to reduce, albeit not eliminate, difficult line-drawing questions over indeterminate measures of economic and political significance.