This spring, we released an updated analysis, which found that up to 259 lives per year could be saved if buildings switched to cleaner heating fuels. In his remarks, Schwartz noted that the bill the Mayor signed “does not reach that full potential, but it takes a tremendous step forward.”

The bill cuts the amount of sulfur and soot emitted by one of the dirtiest types of heating oil, known as “#4”, and begins to incorporate renewable fuels into the city’s heating oil supply. The act will begin to draw down the concentration of toxins in the city’s air—currently at levels that cause health effects similar to inhaling second-hand cigarette smoke. 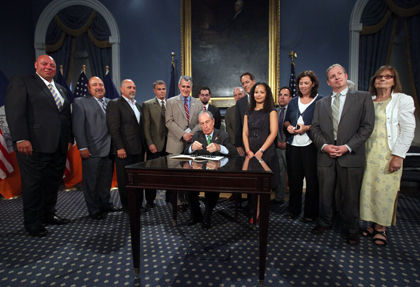 Jason’s comments also noted that “as the first piece of that puzzle, this bill delivers major dividends to the citizens of New York. Heart disease rates will go down, asthma cases will recede…it will literally become easier for New Yorkers to breathe.”

Though more is left to be done to eliminate all of these harmful toxins from the air, this measure lays a strong foundation for doing so.